Wildflowers and berries in Alaska are truly beautiful and everywhere. Twenty hours of sunlight during the summer and the natural cool, moist summers make the state a wildflower paradise. The park setting of Kasilof RV Park allows one to truly enjoy the serenity and the natural beauty of the wildflowers and wildlife that are plentiful in the park. In addition, the park is surrounded by a natural area where wildflowers and plants flourish and an undeveloped forest area at the back of the park overlooking Crooked Creek.

Across the road is Johnson Lake which supports a large water lily bed plus a bog area with unusual flowering plants. Following are photos of the flowers and berries that we have found in the park and the surrounding areas. Many of the following flower photos are from Mary Hopson’s ‘Alaskan Wildflowers‘ which features many wonderful photos of Alaskan wildflowers.

The park has natural areas between each of the RV sites. These natural areas abound with a large variety of flowering plants and berries. The ground is covered with the small green leaves of the low bush cranberries which bloom in the spring and have bright red fruit in the fall.

In addition, there are areas where dwarf Dogwood blooms in the spring and then has inedible berries in the fall. These plants provide a cover for the very fertile soil that is made up of peat and other humus.

A large variety of other plants make up the natural areas between the RV sites. Wild Daisies are very prolific and last most of the summer. Buttercups and sweet clover usually bloom earlier in the summer.

Purple Lupin also blooms early in the summer followed by Dutch Iris. It is common for the natural areas to support the ground cover of Dogwood and Cranberries and then have other flowers coming up through them and blooming above them.

In the early spring, large clumps of green start rising out of the natural areas and by mid-June the long stems are covered with ‘Bluebells’ and ‘Wild Geraniums’. Although each have a short blooming period, the plants continue to provide a green cover.

Mid-summer finds the Larkspur (Delphinium) bloom on tall stocks around the Lodge building both in pink and purple. Then peaks out the beautiful Chocolate Lilies hidden among the huge ferns at the back of the Lodge.

High-bush Cranberries are also prolific in the park in all of the natural areas and along the front. They bloom through the summer and produce fruit which ripens usually in the fall when the leaves begin to turn a bright red. There are other edible berries also in the park including red Raspberries, black Currants, wild Strawberries, Elder berries, Watermelon berries and the low-bush Cranberries.

And we shouldn’t forget about our state flower, the ‘Forget-me-not’. These beautiful blue flowers cover large areas of the natural areas in the park.

We have a large number of wild rose bushes in the park, most the pinkish red. However, we have found several wild white roses. These bushes flower most of July and into August followed by a multitude of rose hips. In August and September, the Goldenrod add color to the beginning change in the temperature. 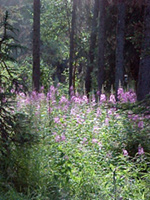 And we should never forget what I consider flowers that truly define Alaska, ‘Fireweed’. The new shoots start appearing as the snow melts and the surface ground thaws. The locals called these shoots, ‘Alaska Asparagus’. The stem grows during the spring and then in early July pods begin to appear at the top of the stem and continue to appear as the stem grows sometimes up to three feet. In mid-July, the pods begin to open revealing the bright reddish strands of blooms.

In some areas, the ‘Fireweed’ covers large areas of the open ground. Here the sun make the plants grow taller and the color is more intense. Indian lore says, ‘When the flowers reach the end of the stem, snow falls in six weeks’. I don’t know if that is true, but I do know that when the blooms reach the end of the stem, the pods open to release the seeds to the wind. The seeds are similar to seeds from the ‘Dandelion’ with feather like tops that carrying the seed on the wind. I have to admit that sometimes it appears that it is snowing.

And finally although this does not include all of the flowering plants that surround the area of the Kasilof RV Park, each summer we have a somewhat rare plant that we enjoy seeing and showing to all that are here. Northern Yarrow is very common across Alaska, but it is unusual for the flowers to be pink. The soil conditions have to be just right for this phenomena to occur. You will just have to come and see it for yourself. Please do!

Kasilof RV Park is a haven for Alaskan birds.  The trees in the park, the lake across the road, and the forest behind the campground all provide a bird friendly habitat for a large variety of birds and waterfowl. Whether it is an Eagle flying over head, a Ptarmigan foraging in the grass with it’s chicks, or a Orange Crowned Warbler flitting from branch to branch in a alder tree, the park is a great place for bird watching. Over twenty species have been spotted to date.

The small birds are lively all summer long with the Chickadees, Finch, Thrush and bright Warblers flitting through branches of the cottonwoods, alders and willows.  The Owls are busy catching the small furry creatures in the natural areas between the campsites and along the road.

There are Eagles flying overhead occasionally, Ravens sitting in the treetops mimicking other birds, and Gray Jays and Blackbilled Magpies flying from tree to tree in the park.

Johnson Lake across Crooked Creek road from the RV park is summer home to a large number of waterfowl.  All of the summer residents of the Park enjoy the birds on the lake and particularly the Common Loons with their beautiful calls in the early morning and evening.

Trumpeter  and Tundra Swans often spend the late summer in the lake on their way south although occasionally a pair will raise young.

The lake has a large variety of ducks. Teal and Mallard ducks plus Grebes and Goldeneyes share the lake for the summer.  Canadian and Snow Geese and Sandhill Cranes arrive in the fall from their nesting grounds up in the tundra of northern Alaska.

Not far from the park is the Cook Inlet with it’s variety of sea birds.  Eagle pairs and their young spend time on the beaches of Kachemak Bay in Homer.

On the other side of the Kenai Peninsula out of Seward are major rookeries for all types of seabirds.  The Kenai Fjords National Park is home to both horned and tufted puffins, Kittiwakes, Cormorants, Arctic Terns and a large variety of Gulls.  The cruise boats that tour the Kenai Fjords National Park spend time touring all the sea birds rookeries as well as the sea animals and the many glaciers that flow out of the Harding Icefield in the Kenai Mountains.

Mergansers with large broods are a common sight on Johnson Lake

Images with an astreisk (*) courtesy of the US Fish and Wildlife Alaska Image Library. We thank those photographers that provided their photos to the library for our use.

See us on yelp